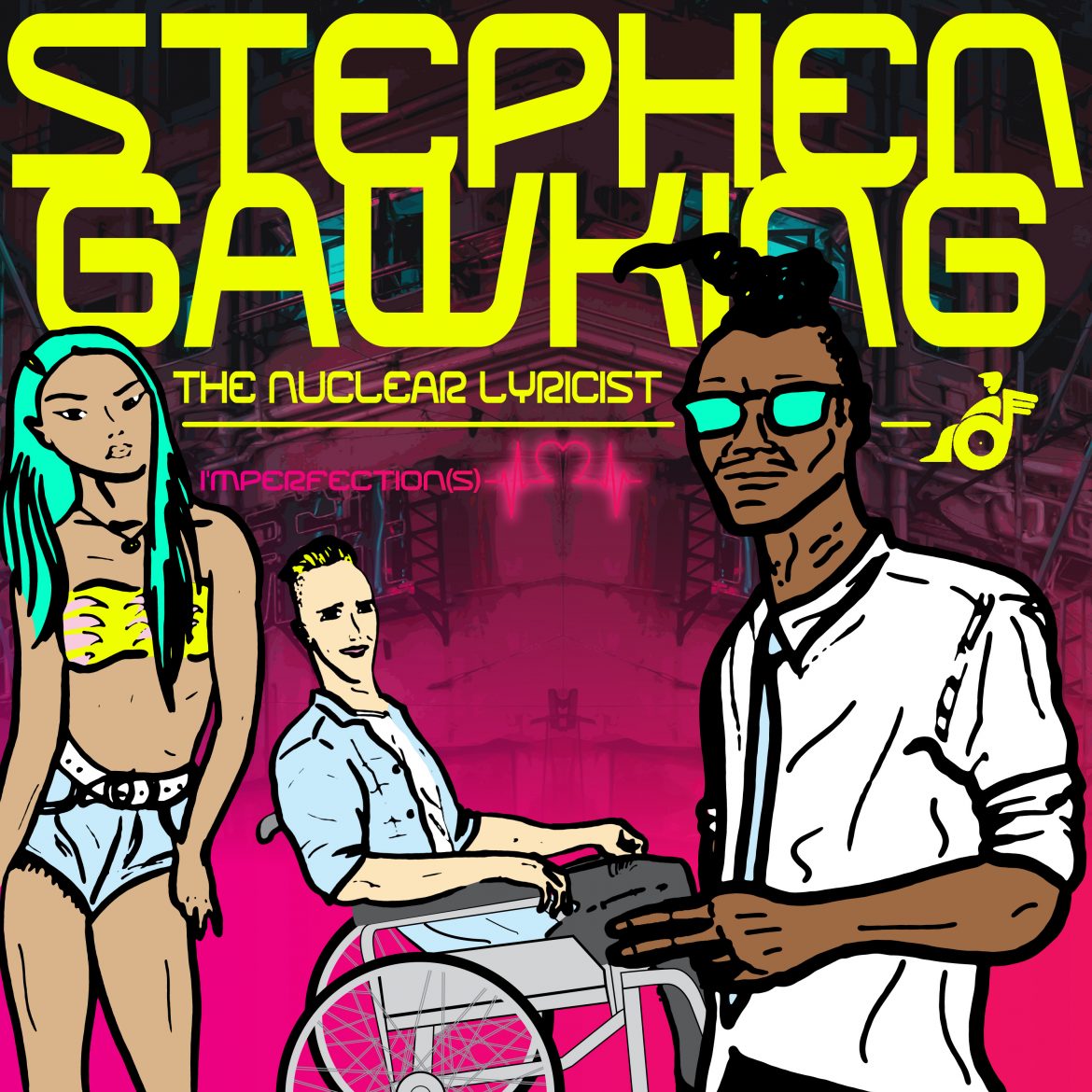 Why the name Stephen Gawking—Nuclear Lyricist?
I was diagnosed with Spinal Muscular Atrophy (SMA) at age one, and so, decided on a wordplay of the world-famous theoretical physicist, Stephen Hawking, for the project. He had a similar disease called Amyotrophic Lateral Sclerosis, better known as Lou Gehrigs. It manifests in various forms, symptomatically affecting one’s motor neurons, and basically leaving a person paralysed. Life expectancy is also known to be reduced, depending on the severity of the condition.

Tell us About I’mperfection(s)? and your most moving moments recording the single?
As you can tell, the title is a wordplay on “imperfections” and “I’m perfection”. The initial inspiration was derived from a friend’s photography project: My Body Counts, focussing on body positivity. I then thought, let’s take it a step further, and make it more than just about one theme, but rather, an all-encompassing identity positivity song. The most moving parts recording was when Pablo recorded the first verse; I remember me and Bobby were super excited and emotional, and then, of course, when Joy recorded the chorus, that was literally the joy of joys (pun intended).

If you could work with any artist in the world who would it be?
That’s a tough one, as there are so many, but, Will I Am (and the Black Eyed Peas) would be a dream come true, as they’ve remained relevant for something like three decades, and have always been focused on positive messages with their music, as well as having found a beautiful balance between hip-hop and pop. Honourable mentions would be: Lil Dicky and Childish Gambino, as they’re doing things differently, and are both super creative. Finally, I have to add Juice WRLD, as he was actually a big inspiration behind I’mperfection(s); R.I.P legend.

Top 3 Inspirational songs of all time?
Honestly, there are just too many to name. My top artists, however, I’ll gladly share. Locally, I would say it started with Leon Schuster in the 90s, then Robbie Wessels in the early 2000s, but the most influential local artist, for me, would be Jack Parow, by far. Internationally, it’s from Snoop Dogg, Eminem, Kanye West, Tyler the Creator to Kid Cudi. I also have to mention King Los; he is, in my opinion, the best word player/rapper/lyricist in the world at the moment.

Explain your creative process
Firstly, I start with a concept of a song, usually inspired by unexplained random outbursts in my head (lol), then I let it rest for a bit, giving it time to mould into a genre or general vibe, and then I write a few lines. Afterward, I pitch it to Bobby, and the first aspect we discuss are the feelings that the song should invoke when someone hears it.

Your highest and lowest point during the Covid-19 lockdown?
Personally, it didn’t bother me in terms of being in lockdown, as I’ve been in lockdown in my own body for 28 years (lol). Seriously though, the worst part was the unknown; the fear of people contracting and dying from the virus, the overloaded healthcare system, the economic disruption, and so on. Those are the real serious issues, not the lockdown restrictions.

What’s an average day like for you?
Kind of like a sitcom, but with more drama (lol). Picture That 70s Show, but in the year 2021, and set in South Africa on a farm.

Best Music concert experience?
I attended the Vengaboys show a few years ago at Carnival City; what a healthy dose of nostalgia that was.

If you were a song, what would you be and why?
Yet another tough one, but let’s opt with Kanye West’s “Stronger”. The lyrics are self-explanatory: “Now that that don’t kill me, can only make me stronger, I need you to hurry-up now ’cause I can’t wait much longer”

Where to from here?
We are actually currently working on the 3rd single (coming soon). We have a full album fully mapped out, that we are pushing towards slow and steady, but only one song at a time, for now, as we don’t believe in rushing the creative process. Our mind set is one that values quality over quantity; as we certainly aren’t one of those fly-by-night type acts, rather, we see ourselves as being extremely motivated and totally determined to the cause, with our will to succeed ranking high.

Tune into Bafana FM to listen to I’mPerfection(s) now on the main digital playlist. The Voice Of Africa keeps on giving!